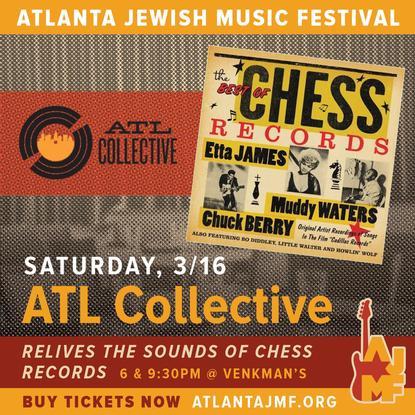 On Saturday March 16th, The Atlanta Jewish Music Festival proudly and excitedly welcomes back the ATL Collective for two presentations of “The Sounds of Chess Records” at Venkman’s. The best of American blues labels, Chess Records was founded in Chicago in 1950 by two Jewish immigrants from Poland. Brothers Leonard and Phil Chess introduced America to some of the greats in blues for sure, but ultimately in soul, gospel, and early rock as well. As with all ATL Collective shows, expect the best Atlanta musicians on the Venkman’s stage recreating the finest and most influential of Chess releases. You’ll be singing along to old favorites while discovering new local talent. This show is so good we’re going to bring it to you twice. Trust us. Get your tickets now.

Purchasing a General Admission ticket does not guarantee a seat/table. Bar Seating may be available on a first come, first serve basis. Once all seats are occupied, standing room is all that remains.