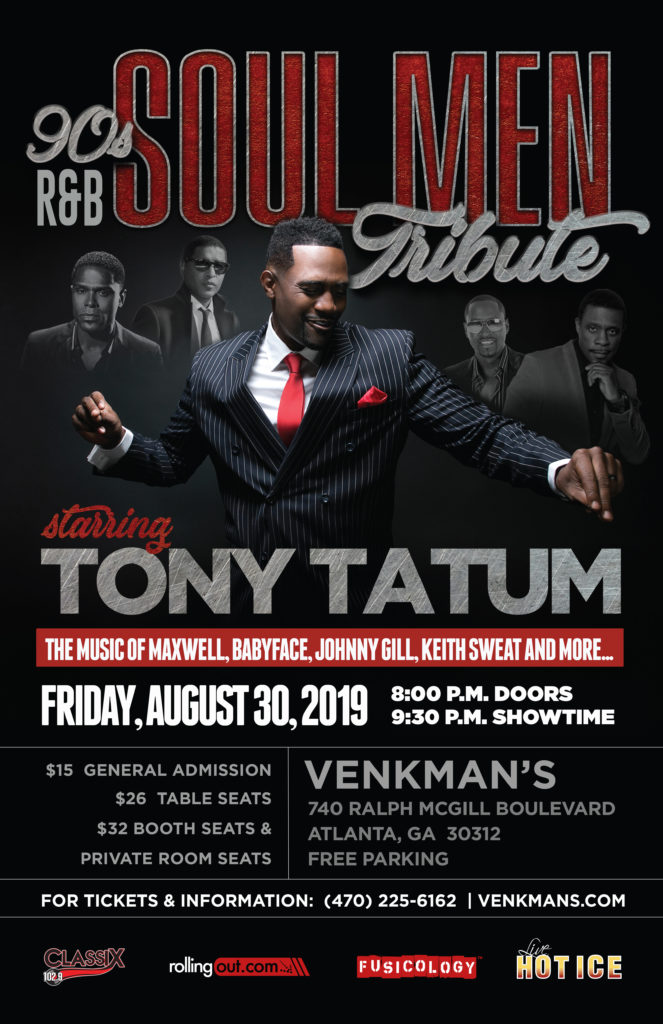 In the 90’s R&B was still the music that dominated Urban radio, but who were the greatest males singers and groups of that era? From Neo-Soul to New Jack Swing to Hip Hop/Soul fusion, R&B of the 90’s was the last decade to reinvent boy bands, to spotlight male crooners, and to give rise to the “naturally” sexy, soul brother. Teddy Riley, Babyface, and Jimmy Jam & Terry Lewis became non-stop music factories while young upstarts like Sean “Puffy” Combs, Dallas Austin, and Jermaine Dupree were quickly coming into their own. And with competition from some of the top-selling music divas of all time, artists like Maxwell, Babyface, Keith Sweat, and Johnny Gil were among just some of the male stars that kept their female audiences happy with a mix of uptempo dance anthems AND smooth, sexy ballads.

Venkman’s and Hot Ice LIVE are proud to present a tribute to 90’s R&B Soul Men starring singer/songwriter Tony Tatum. Tatum, originally a native of Michigan, honed his talents while touring with Keith Sweat for six years. “He’s a great performer,” Sweat said of his young protege, “and now it’s time for him to his own thing.” Heavily influenced by Babyface, Tatum developed a vocal range and stage presence that have kept him in demand with his own touring band called the Tatum Experience. Tatum has written, co-written, and collaborated on songs with the likes of Usher, Jazze Pha, Omarion and more. He has also toured with New Edition, Ne-Yo, and Howard Hewitt among others, and has been featured on The Real Housewives of Atlanta. So bring your crew, and come prepared for a full night of entertainment with dinner, drinks, and dancing with a throwback to an era of fun, sexy music.

PLEASE NOTE: If earlier dinner reservations are made, your seats are not guaranteed for the show. For example, you cannot reserve a table at 8:00 pm and keep it for a 10:00 pm show. The only way to guarantee a seat for the show is to purchase table, booth or banquette tickets.

Reservations for the Captain’s Room (private dining room) can be reserved for parties of 10-24 guests. For more info contact info@venkmans.com

THE DIRTY DOORS - A Tribute To The Doors